What is GERD?
Gastroesophageal reflux, also known as acid reflux, occurs when the stomach contents back up into the esophagus and/or mouth. It is normal to have occasional, brief episodes of reflux that do not cause significant symptoms or complications. People who experience symptoms as a result of reflux have gastroesophageal reflux disease (GERD). Symptoms include heartburn, regurgitation, chest pain, upper abdominal pain, vomiting, foul breath, hoarseness, and difficulty or pain with swallowing.

At the end of the esophagus, the long tube of muscles that carries food from the mouth to the stomach is a circular ring of muscle called the lower esophageal sphincter. This ring relaxes when food is swallowed so that food can enter the stomach. Afterwards, it tightens again to prevent back up of food and acid into the esophagus. When the sphincter is weak or is relaxed due to stomach distension, liquids can occasionally in the stomach wash back into the esophagus. This is a normal occurrence in healthy individuals and is usually brief and infrequent.

Hiatal hernias make acid reflux more likely. The diaphragm is the large, flat muscle between the lungs and the abdomen. The esophagus passes through an opening in the diaphragm. When a person bends, coughs, or strains, the diaphragm normally contracts, which reinforces the lower esophageal sphincter to help prevent reflux. If the stomach partially slips through the opening in the diaphragm into the chest, a hiatal hernia occurs. There is no way to prevent this, but maintaining a healthy weight can decrease your risk of developing a hiatal hernia. Pregnancy and advanced age are also contributing factors. 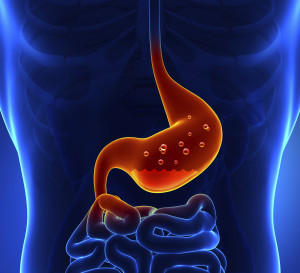 GERDAcid reflux, or heartburn, occurring at least 2-3 times weekly is a common symptom of GERD. This is usually experienced as burning sensation in the center of the chest, whichsometimes spreads to the throat. There may also be an acid taste in the throat. Other symptoms include pain in the upper abdomen, chest pain, difficulty swallowing, pain with swallowing, hoarseness, sore throat, cough, taste of acid in the throat, regurgitation of foods/fluids, worsening dental disease, recurrent lung infections, chronic sinus infections, waking at night with choking sensation or asthma symptoms.

Diagnosis
GERD is usually diagnosed based on symptoms and the response to treatment. When no complications are present, a trial of lifestyle changes, and sometimes medication, are often recommended. Testing is required when the diagnosis is unclear, if serious signs and symptoms are reported, or if the reflux symptoms have been present for several years.

If further testing is recommended, an upper endoscopy is commonly used to assess for any damage to the lining of the esophagus, stomach, and small intestine. If abnormal tissue is seen in the esophagus, a biopsy can be taken to determine the extent of tissue damage.

If GERD symptoms do not improve with lifestyle changes and medications, a 24-hour esophageal pH study may be ordered. A small capsule device is placed on the wall of the esophagus through an upper endoscopy. The device stays in the esophagus for 1-2 days and measures how much stomach acid is reaching the esophagus. During this time the patient keeps a diary of symptoms, as well as food and activity. The patient wears a pager-sized receiver on the belt or waistband. This receiver collects the data from the capsule device, which is then uploaded to a computer and analyzed by your doctor to determine the frequency of reflux and the relation of reflux to symptoms. The c
apsule device is designed to fall off of the wall of the esophagus on its own, be passed in the stool and flushed down the toilet.

In people who continue to have symptoms despite treatment, or if the diagnosis is unclear, esophageal manometry may be ordered. This is a test that measures the muscle contractions of the esophagus. It can help determine if the lower esophageal sphincter is functioning properly. This test involves swallowing a tube that measures contractions.

Complications
The vast majority of patients with GERD do not develop serious complications. In some people with severe GERD, however, complications do occur.

Ulcers can form in the esophagus as a result of damage from stomach acid. These can bleed in some cases. Damage from acid can cause the esophagus to narrow or scar, causing a stricture that can cause food to get stuck during swallowing.

Some people reflux acid into the throat causing inflammation of the vocal cords, a sore throat, or a hoarse voice. If the acid is inhaled into the lungs, it can cause a type of pneumonia or asthma symptoms. If this occurs chronically, it can cause permanent lung damage.

Barrett’s esophagus occurs when the esophageal lining is repeatedly damaged from longstanding GERD. This carries a small risk of transforming into cancer cells.

Treatment
Lifestyle changes are a good first step for mild symptoms. Weight loss may help people who are overweight to reduce acid reflux. Raising the head of the bed 6-8 inches may help with people who have heartburn night. This allows gravity to prevent acid from refluxing. This can be done with blocks of wood under the legs of the bed, or a foam wedge under the mattress. There are also commercial products for this purpose. Sleeping on additional pillows can cause an unnatural bend in the body, which may increase pressure on the stomach and increase acid reflux, so this is not an effective method. Some foods can cause relaxation of the lower esophageal sphincter, which increases reflux. These include caffeine, chocolate, alcohol, peppermint, and fatty foods. Smoking reduces the amount of saliva in the mouth and throat, and also lowers the pressure of the lower esophageal sphincter. These all contribute to increased reflux, so quitting smoking can improve GERD symptoms. Smoking also increases esophageal cancer risk. Eating smaller, more frequent meals and avoiding lying down after eating can improve reflux symptoms. Try to eat your evening meal more than three hours before bedtime. Tight fitting clothing can increase pressure in the abdomen, which forces stomach contents into the esophagus, so wear looser clothing for improvement in symptoms. Chewing gum or using lozenges can increase saliva production, which may help clear acid from the esophagus.

Antacids can provide short-term relief of mild symptoms. These include Tums, Maalox, and Mylanta.

Histamine antagonists include Zantac, Pepcid, and Tagamet. These can somewhat reduce production of stomach acid and can help with mild to moderate reflux. These are both over-the-counter and prescription, and can be taken daily or on an as-needed basis.
For moderate to severe symptoms, proton pump inhibitors (PPIs) are the best option. These include Prilosec, Nexium, Prevacid, Dexilant, Protonix, Aciphex, and their generics (omeprazole, lansoprazole, pantoprazole). These are stronger and more effective than histamine antagonists. These medications are usually taken daily before breakfast. The risks of long-term PPI use are small, but include decreased calcium and magnesium absorption. If you are on a PPI chronically, you may need to have these checked periodically.

If symptoms persist despite PPI use, further testing, as described previously, may be recommended. If these tests are abnormal, and GERD symptoms are very severe, surgery is sometimes recommended.  The Nissen fundoplication involves wrapping the upper part of the stomach around the lower end of the esophagus and is used to repair a hiatal hernia and strengthen the lower esophageal sphincter. The outcome of surgery is usually good, but complications can occur, and results may not be permanent. Some people have difficulty swallowing, increased bloating and gas, or diarrhea after the surgery. It is very rare that surgery is needed for acid reflux. Medications and lifestyle changes are almost always successful.